That is the question.

The battle between these 2 giants is ongoing. Both have
enormous reputations due to the popularity of their products. Though not
considered high end, their products are of quality value, and that’s what makes
them so great.

It will be the purpose of this article to measure the value of
their products and see if we can discern a winner.

The invention of the Kettle grill in 1952 marked the beginning
of Weber grills. Its inventor George Stephan, employed by Weber at the time,
was always looking for ways to improve his grill. It was a quick hit in the
industry and by 1956 he had redesigned it to more modern standards. Then in
1985 came the Weber Genesis grill. George realized cooking grates would
increase equal heat distribution and also better control flare ups due to
drippings. This truly made grills as we know them today a reality.

W.C Bradely co. has been around for well over 100 years.
From this company comes Char Broil. Bradely later expanded into the iron works
industry and by 1949 had manufactured their first grill. It wasn’t, however,
until 1979 that Char Broil had been given birth. Char Broil grills are made in
China though they absolutely offer high value.

Char Broil uses a lower quality steel which is the biggest
mark against them. However it is also the reason for a $100 lesser price tag.
Corrosion and rust are the biggest concerns, though it will take quite a while.
The Weber will hold up to the elements much better over time. Weber also uses
better casters. The hotter of the 2 grills is the Char Broil.

It’s a hard choice. Really for us at Grill Tanks Plus, we
take the Char Broil, but its only because we are in the business of cleaning
and repairing grills so we choose the better stats of the Char Broil. But for
the most value for the average customer I would say the Weber is a grill that
will endure and remain consistent for much longer. So it’s a matter of what you
value here really. A better performance, or a longer lasting consistent but
lesser one (mind you the differences aren’t that great.)

You really can’t go wrong for the money with either of
these. 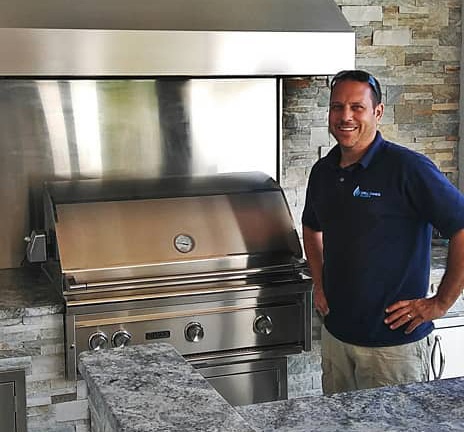